The Brownie: Its Rich American Beginning 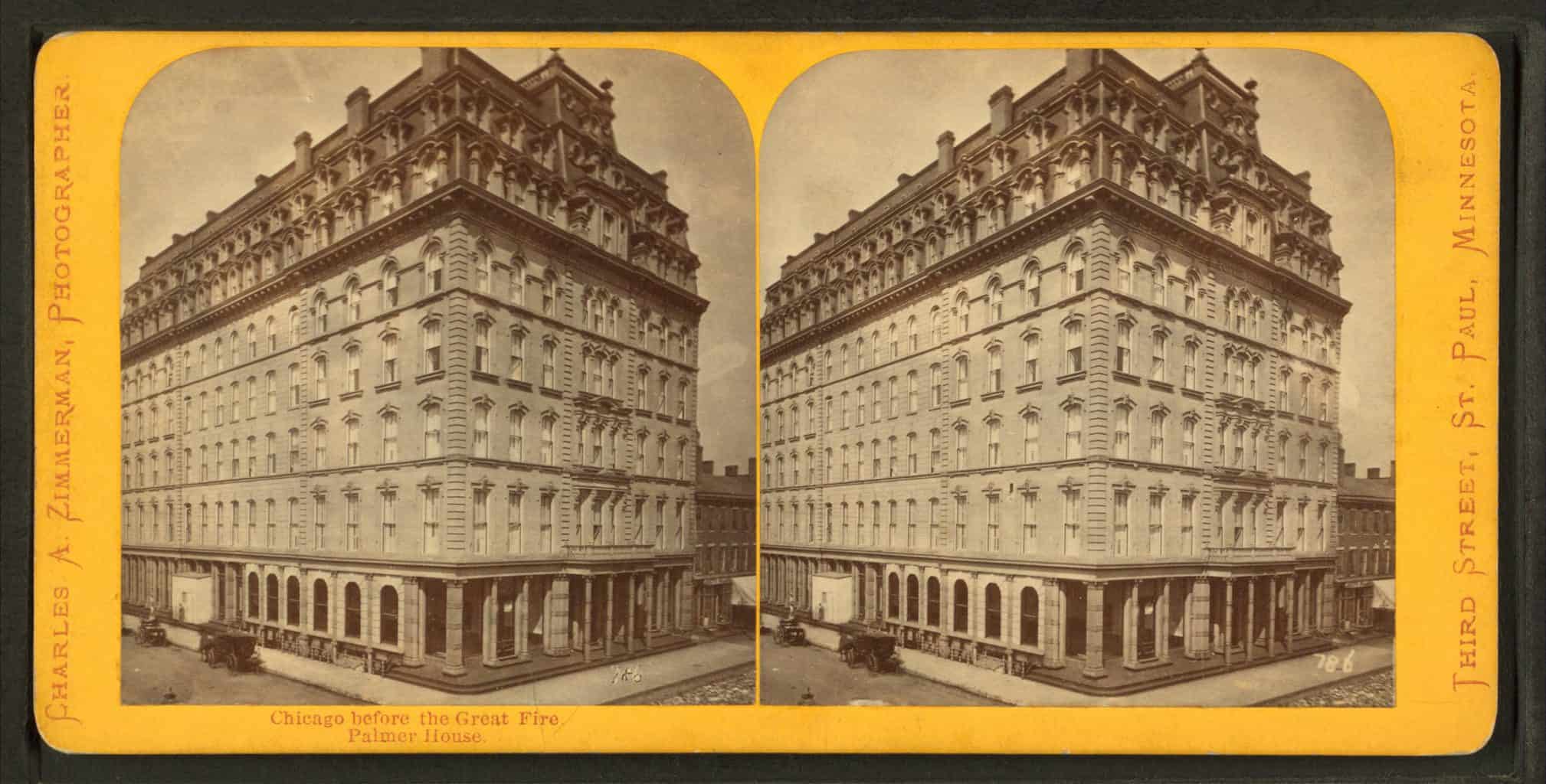 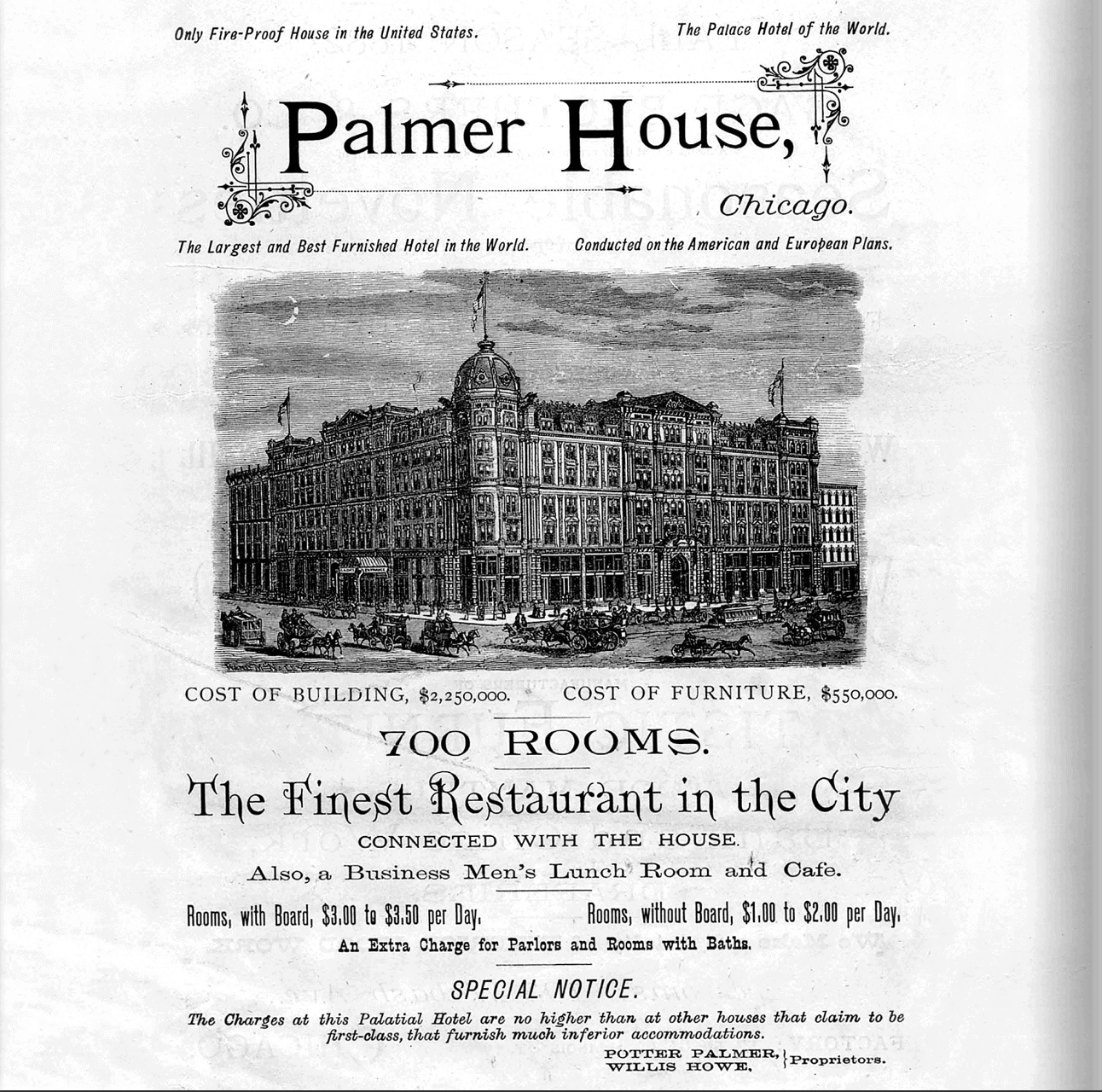 The Second Palmer House, where the first Brownie was created.

Few Americans have made it through life without tasting a brownie but most have no idea that it is an American culinary creation.  A history that is intertwined with the nations longest continually operating hotel:  The Palmer House of Chicago, IL.  As the story goes,  Potter Palmer, a business man aiding in the development of the famed State Street in Chicago was introduced to Bertha Honoré by his friend Marshall Field. This introduction led to marriage and a magnificent wedding gift for Bertha–THE PALMER.  The same year they were married, “The Palmer” opened on September 26, 1871.  13 days later The Great Chicago Fire swept through the city destroying the brand new hotel.  Potter immediately secured a 1.7 million signature loan to rebuild.  At the time it was said to be the largest individual loan ever secured!  This grand new hotel was more luxurious than the last. It was advertised as “The World’s Only Fire Proof Hotel”.  It was in this hotel that the brownie would be born.  Bertha was interested in much more than hotel operations.  She was president of the Board of Lady Managers for the World’s Fair: Columbian Exposition in 1892.  The fair celebrated the 400th anniversary of Christopher Columbus’ voyage and a post-fire rebuilt Chicago. This Board of Lady Managers was the first of its kind and was granted this designation by the senate when they passed the “Fair Bill” and in 1890 President Benjamin Harrison signed the bill into law.  These Lady Managers were in charge of designing The Woman’s Building at the fair and this installment was also the first of its kind. It contained an exhibition space, an assembly room, a library with 7,000 books all written by women, two grand murals, and a Hall of Honor all filled entirely with works by women.  In addition to The Woman’s Building project, Bertha, as the president of the Board Lady Managers, convinced congress to authorize the minting of the Isabella Quarter.  This was no small feat as it was in addition to the already approved commemorative half dollar depicting Columbus on one side and his ship on the other. The Isabella quarter is a depicts Spanish queen Isabella I of Castile who sponsored Columbus’s voyages to the New World on one side and a woman spinning flax on the other and reads “Board of Lady Managers”–pretty neat they pulled that off!  This sets the stage for how excited Bertha must have been for the grand opening of the fair and the culmination of all her planning and hard work.  Anticipating the arrival of women from around the world coming to attend the fair, Bertha asked the Palmer House pastry chef to create a small cake or confection that could be included in boxed lunches to hand the women as they headed off to a full day at the fair.  This unknown chef is believed to be the creator of the all American brownie and it is still on the menu at The Palmer House, served as it was almost 130 years ago topped with walnuts and an apricot glaze.  Many cookbooks published just after the fair, circa 1893-1904 have recipes with “brownies” in the title and contain walnuts.  It would make sense that Bertha put a brownie in the hands of hundreds, maybe thousands, of women from around the world for the first time and it spread like wildfire.  If you can’t get to Chicago to taste the original for yourself, here is the recipe posted by The Palmer House and a couple more related facts below.

Before investing in Chicago real estate, Potter had a retail store that catered to women’s fashion and boasted a no questions asked return policy, due to health issues he exited this business by selling it to Marshal Field and Levi Leiter which later grew into the major department store Marshall Fields.

The fair lasted 6 months:  May 1, 1893 to October 30, 1893. Two days before the end of the fair the Mayor of Chicago, Carter Harrison, Sr. was assassinated and the closing ceremonies for the fair were switched to a memorial service in his honor.

The Isabella quarter is now valued upwards of $2,000 in mint condition and a mint Columbian Exposition half dollar is valued around $900.

Ingredients for brownie, Apricot glaze instructions and ingredients are below.

Note:   When the brownie is properly baked, it will remain “gooey” with a toothpick in the middle due to the richness of the mixture.