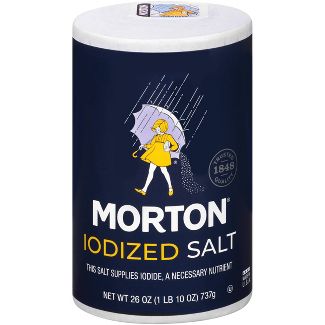 There are so many choices of salt on the shelf–pink, red, gray, black, sea, kosher. . . and finally iodized.  Salt (sodium chloride) whether it is mined or evaporated from deposits all around the world can have varying amounts of iodine in it–so why do we add more later?   Worldwide, iodine deficiency is the leading cause of intellectual and developmental disabilities.  Lack of iodine in the diet can also cause a variety of thyroid problems, including goiters, that were much more prevalent before the introduction of iodized salt and are still common in areas that do not have access to significant iodine sources.  Switzerland was one of the first to mandate the iodization of salt in 1922 to combat these deficiencies. Another relationship between iodine and the thyroid gland is known by some living near nuclear plants.  In the event of a nuclear emergency, one of the procedures advises locals to take a pill containing KI (potassium iodide) to protect their thyroid from radioiodine that could be released into the air.  It’s entirely possible that people with a varied diet do not need the added iodine found in iodized salt. But. . . there was a more recent study published in the National Bureau of Economic Research that found since its introduction in America in 1924, iodized salt had such an amazing effect on peoples development that it raised the IQ of the country.  WOW!