Spring is in the air and it is Maple Syrup time!

This is the time of year as kids we would go watch them make Maple Syrup at our local “Sugar Bush”, have pancakes and sample some maple sugar candy. Mmmmmmm one of the first signs of spring! 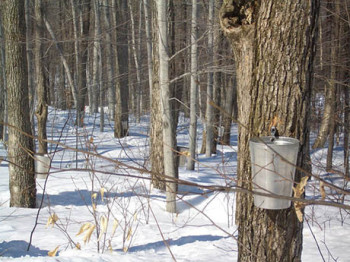 To learn everything about how to make your own maple syrup and get all of the supplies needed, visit the Anderson Maple Syrup website.  They have a great website with loads of information and how to videos to get you on the right track for cooking up your very own batch of syrup.

Maple syrup is a syrup usually made from the xylem sap of sugar maple, red maple or black maple trees. In cold climates, these trees store starch in their trunks and roots before the winter; the starch is then converted to sugar that rises in the sap in the spring. Maple trees can be tapped by boring holes into their trunks and collecting the exuded sap.  The sap is processed by heating to evaporate much of the water, leaving the concentrated syrup. It is produced in the spring, when the temperatures get below freezing at night and above freezing during the day. Nothing is added to the sap- only water is evaporated away. Each tap can yeild 10-12 gallons of sap during a season (about 1 quart of finished syrup). https://en.wikipedia.org/wiki/Maple_syrup

Pure maple syrup is a “natural” food that contains nothing artificial, no additives, no colorings, or preservatives. The main sugar in pure maple syrup is sucrose. Small amounts of fructose and glucose are found in the darker grades of syrup. 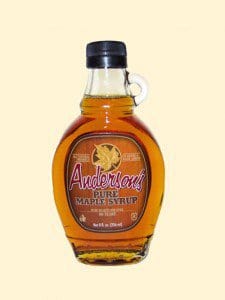 History reveals several explanations for the discovery of maple syrup. The most widely accepted story is that of how a family squabble turned into an important agricultural discovery. The story says an Indian women placed her cooking pot under a maple tree as a subtle hint to her man that she needed water from the spring to cook  a meal with. The man, in a fit of anger, plunged his tomahawk deep into the maple tree to remind his women that he was above such a womanly chore as fetching water. The next morning, as the story continues, the women found the pot nearly full and proceeded to cook meat for a meal. What she thought was water cooking was actually sap from a maple tree. After the meat was cooked they discovered the sweet flavor in the pan. She had made the first pot of pure maple syrup. Other stories are reasonable and some not, but one fact that can not be denied is that pure maple syrup is definitely as American as Plymouth Rock or pumpkin pie and older than either.
The Indians regarded the sap of the maple tree as a direct gift from the Great Spirit. They welcomed the Mapleing Season each year with a great thanksgiving celebration. Maple syrup and the direction to make it was among the first gifts given to white settlers, who embraced the process of tapping the trees and making maple syrup. Maple syrup was an important part of surviving the long, cold mid western winters for the Indians and settlers alike.
The maple syrup industry is located only in North America. Maple trees grow and thrive only in specific regions of North America, specifically the areas from New England to Minnesota and the Canadian provinces that border on those states. Some small maple forests may also be found as far south as Kentucky and Virginia. In short the maple industry covers the northeast quarter of the North American continent. As a result, other regions know very little about the difference between pure maple syrup and imitation maple syrup that is found side by side in the grocery stores today. Always look at the ingredients. If there is none listed or if only pure maple syrup is listed then you have the best sweetener nature has given us.
Color is an important factor in grading and classifying maple syrup. The top grade is Light Amber and is very pale in color with a mild maple flavor. Most people who are not real maple syrup connoisseurs do not like this grade as much as the next two grades. Medium Amber is a little darker in color than the light amber, but still has a mild flavor. Dark Amber is, of course, a little darker yet, but is not so dark that you cannot see through it and is fairly light compared to commercial. Dark and Medium Amber are the two most popular. They are flavorful, but not too over powering like the commercial grade. Finally, commercial grade syrup is anything darker than dark amber. It has a very strong flavor and is almost too dark to see though. It is great for cooking and for flavoring, but many feel it is too strong a flavor for pancakes. Each of these grades of syrup are made the same way. The time of season the syrup was made or the condition of the sap collected will cause these variations in grade.  Anderson’s make sure that their Grade A syrups are always between Medium and Dark Amber in color.  Above information on maple syrup history is courtesy of Wikipedia.com

These Gunflint Trail Syrups are made in Minnesota by Jams by Jan. They are all natural and are made using the whole fruit.  The flavors are very intense and unique. 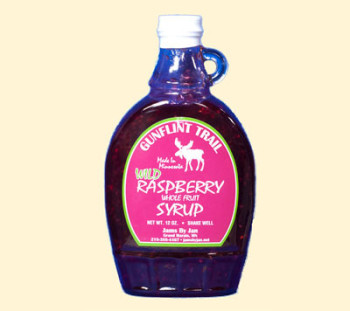 They come in 4 varieties: